A new report on the state of the exhibitions industry and key issues going forward has been released by UFI.

Its Global Barometer report confirms strong industry performance for 2019, but also a higher level of uncertainty when looking towards 2020 in many countries, especially in the Asia-Pacific region and Latin America.

The survey reveals a positive result in terms of operating profit, with at least 70 per cent of companies in each of the four regions maintaining a good level of performance in 2019 compared to 2018.

The majority of companies from all regions also expect an increase in gross turnover. However, there is uncertainty in many countries, even prior to the coronavirus issue.

Results also indicate that the key issue for the industry remains the ‘state of the economy at home’ (selected by 26 per cent of all respondents). This is ahead of ‘competition within the industry’ (20 per cent) and ‘global economic developments’ (19 per cent). 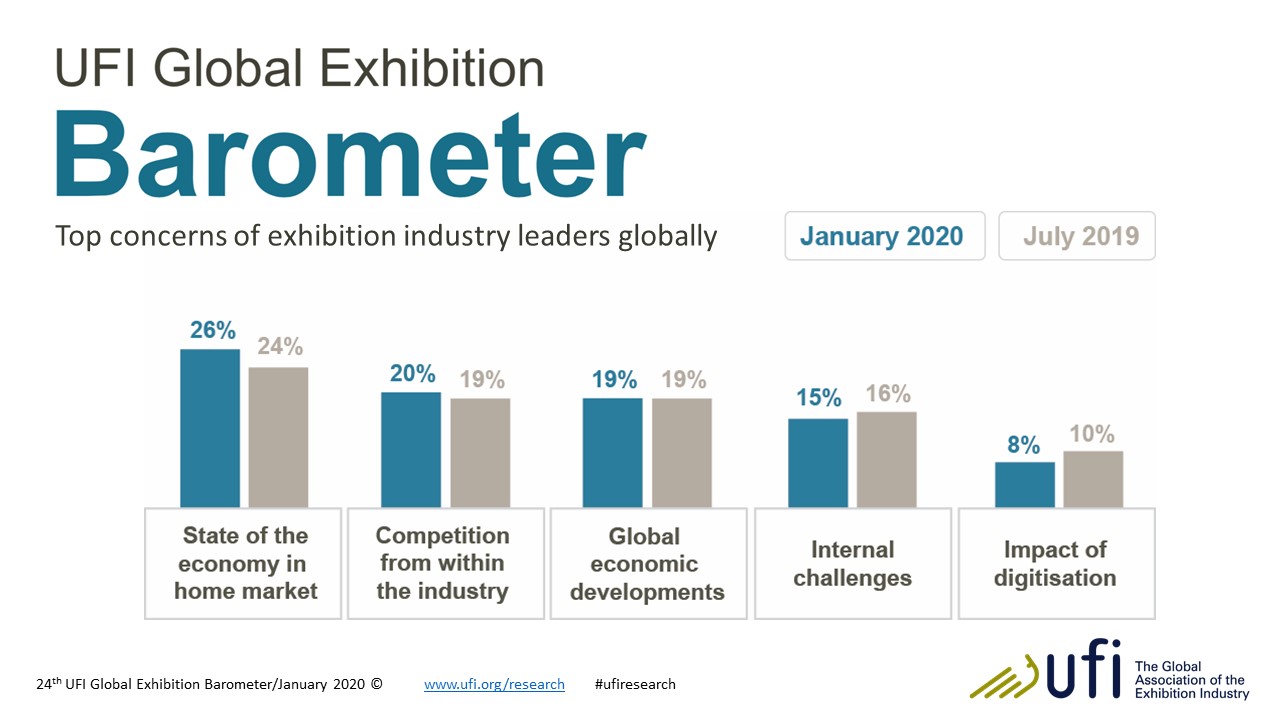 In recent editions of this long-running UFI research, there has been a trend towards this focus on the national/regional economy over global economic development.

In terms of strategy, in all regions, a large majority of companies intend to develop new activities, either with classic exhibition industry initiatives and/or by moving outside current product portfolios.

In terms of geographical expansion, on average globally, more than one company out of three declares an intention to develop operations in new countries.

The survey also tackles the evolution of the exhibition business model and to what extent specific features are implemented.

The results indicate a major use of “conference stages on and near the show floor” (3.6 out of a scale of 5).

“Exhibitions grew again in 2019, but a slowdown is expected for the beginning of 2020. The novel coronavirus outbreak, which has already led to many shows being postponed or cancelled in China and Asia, will impact this as well. We all hope this situation settles quickly, as the exhibition industry is using these results to shape its general development plans and how it’s adapting to the continually evolving classic business model,” said Kai Hattendorf, Managing Director and CEO, UFI.

This latest edition of UFI’s bi-annual industry survey was concluded in January 2020 and includes data from a record 438 companies in 70 countries and regions.

In all regions, the majority of companies (those in a position to assess their turnover), expect an increase in gross turnover.

Eight of the selected countries have, for the three periods surveyed, a majority of companies declaring an increase in turnover: Australia, Brazil, Germany, India, Indonesia, Russia, the UAE and the USA.

However, significant levels of uncertainty over the period are recorded in Argentina, China, Macau, Japan, Mexico and the UK.

Some 79 per cent of companies in the Asia-Pacific region, 87 per cent in the Middle East and Africa, 90 per cent in Europe and 93 per cent in the Americas intend to develop new activities, in either the classic range of exhibition industry activities (venue/organiser/services) and/or moving outside current product portfolios.

The 24th Global Barometer survey looked into how the exhibition model is evolving, by questioning companies as to what extent specific features are implemented, as well as the share of available space used for these features.

Results indicate a major use of conference stages on and near the show floor (3.6 out of a scale of five), followed by open meeting spaces (2.9) and catering/designated food spaces (2.8). Off main site events are, by comparison, less common (2.0). These features occupy on average less than 10 per cent of the total space of the exhibitions. The survey results reveal various stages of development and diverging focal points across different markets and regions.